I moved house about 9 months ago. Around 3 months after moving in I started to notice an intermittent sewage smell in the bathroom upstairs. For the last few months I have been checking all traps and trying to pinpoint the smell. There is no issue with the traps, I believe the smell is coming out from around the toilet soil pipe connection. This is where there is a gap in between the soil pipe and tiles. You can feel a bit of a draught around the soil pipe and the smell comes with it. Its very intermittent. I have just taken the toilet off but there is hardly any room between the soil pipe and the tiles to take a proper look behind. There are no leaks anywhere in the bathroom or downstairs. Last week I was working in the hallway which is inline to the toilet and I had to lift the floorboards up, as soon as I did that I could smell sewage. Any idea what it could be? Behind the toilet in the box could there be a faulty AAV? There’s only two things I can think of that could be causing the issue - faulty AAV (if there is one) or lose connection somewhere?


Because there is a high box behind the toilet I am taking a guess there might be an AAV in there: 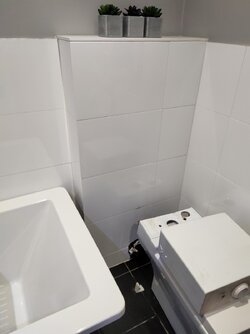 The soil stack is a strange setup. It goes from upstairs then to the downstairs toilet then there is a horizontal run before it drops below floor level with a rodding point. I believe these houses might have originally had a downstairs bathroom only (1950s / 1960s house) 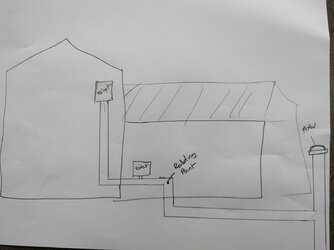 This is the downstairs rodding point – there are no smells around here. If I take the rodding point cap off there is the same smell but nothing is backing up. 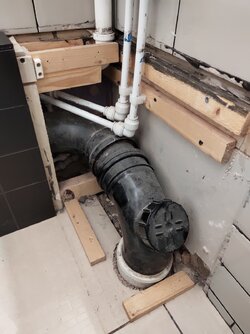 The stack terminates outside here with an AAV 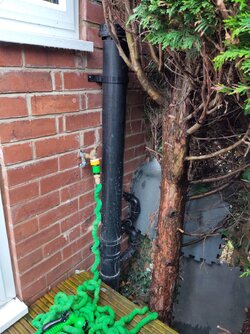 I can’t get to the manhole cover – its been decked over(!) there is one 4m before that one though and I have checked and its not backing up / overflowing.


Any ideas? I have just fitted a new flexible pan connector in the off chance its that but it isn't. I think my next job now is to look into the box behind the toilet.
A

Yes I’d be looking for another aav, or perhaps even check the outside one isn’t frozen/stuck.
W

"I can’t get to the manhole cover – its been decked over."
So cut a neat hatch in the deck before its needed so it doesn't get butchered when access is needed in a hurry ( i predict this is most likely to happen around 3am on a dark, cold, rainy Sunday morning. ) by you or an emergency plumber.

Reply to Bad smell from around internal soil pipe in the Plumbing Forum | Plumbing Advice area at PlumbersForums.net