What am I doing wrong? Boiling water tap connection.

Discuss What am I doing wrong? Boiling water tap connection. in the DIY Plumbing Forum area at PlumbersForums.net

Hi, I'm really needing some advice please.
I'm trying to connect an instant hot water tap, but haven't got as far as switching the tank on yet. There are 3 water pipes and a rubber tube coming from the tap, hot, cold and cold connection to the tank, then the rubber instant hot water pipe.
I assembled and connected everything according to instructions, however every time I turn the boiling water tap on, water leaks out of the inside of the tap. Cold and hot taps both work fine though, with no leaks at all.
The rubber tube that brings the boiling water to the tap was already pre connected inside the tap and I can't see any way to get inside the tap to check the fitting of it and to see if all is well inside, but the connection to the tank was fine, no leaks.
This is the second tap to do the same thing, I swapped the first tap thinking it must be faulty, but it must be something I'm doing wrong, for the same thing to be happening on two taps.
I've changed lots of my own taps over the years so am reasonably competent, but I've never had one of these boiling taps before, so I could well be missing something.
What could cause a brand new tap to leak from inside, on one tap only?
Any advice gratefully received.
O

Try reading the section on 'vent tube' or similar.

There should be a pipe from the tap to somewhere on the unit to allow for venting.

Thanks for the replies, the tap is an innocenti boiling water tap. It's a sealed system without any venting.
B

Way too cheap for a boiling water tap? I doubt the quality, however that’s not much help sorry.
T

You are possibly right, but there are lots of boiling taps available at that price which get great reviews.
I have decided to just stick to a normal tap for now however, I can't seem to get a plumber out as all are booked up for months, or don't want a small job.
Thanks to all who commented.

Is the leak from the tap Hot or Cold water?

This one, presumably not a U.K installation with the wall outlets. 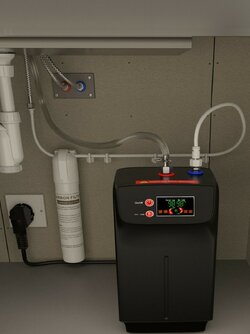 If you update your profile location to your town, someone on here might be local and available to help.

Reply to What am I doing wrong? Boiling water tap connection. in the DIY Plumbing Forum area at PlumbersForums.net