Discuss weak toilet flush in the Bathrooms, Showers and Wetrooms area at PlumbersForums.net

My toilet flush is very weak & can't really even flush a few sheets of toilet paper away.
A syphon flush, not a flapper.

Up until a few days ago it worked perfectly, then the flush just started being really weak. Doesn't flush toilet paper at all.
Water comes out & the cistern empties, but the water comes out so weak that nothing flushes away.

The water makes a slightly different sound now when it comes out of the cistern into the bowl - I can hear a hollow sound now coming from the cistern, as if there's not enough water or too much air somewhere & it's kind of struggling.

Nobody in the house did anything that might have caused this.

Thought it might be the diaphragm in the syphon. When I took it out it looked fine, but I replaced the entire syphon anyway (this is the new one I put in).

After re-fitting everything with a brand new syphon & testing the flush, it's still as weak as it was when I started. Still makes the hollow sound.

I've tried adjusting the levels on the syphon to fit the water level etc.

I've tried cleaning the holes under the rim of the toilet that feed water into the bowl. They weren't blocked but I gave them a scrub with a wire brush anyway.

Nothing works.
The pipes that carry the waste away from the toilet are fine - we can flush by throwing a bucket of water down.

Can't find any other suggestions online about what this might be. Anyone got any thoughts?
U

Is there a flush pipe in between the cistern and pan, or is it close coupled?
B

Undertrained said:
Is there a flush pipe in between the cistern and pan, or is it close coupled?
Click to expand...

It's close coupled.
U

Could be that something has lodged in the top where the cistern sits.
B

Undertrained said:
Could be that something has lodged in the top where the cistern sits.
Click to expand...

Don't think so? I took the whole thing off when I was replacing the syphon & didn't seem to be anything unusual there

ShaunCorbs said:
Then something has been changed or done to it else it wouldn’t change originally
Click to expand...

Yeah I just can't figure out what was done to it.

It's an old enough toilet & gets a lot of use. There's a good few of us living here & only one toilet. Could it be something wore away cos of use?
Like I said I did install a completely new syphon, along with a new donut washer. Is there another part of the cistern that might be affecting this?

ShaunCorbs said:
Not in a short space of time and would slowly get worse

No other than the water height in the cistern or a blocked toilet but your water level in the bowl would rise
Click to expand...

What might affect water height in cistern? Haven't thought of that angle
U

Boilersuit said:
What might affect water height in cistern? Haven't thought of that angle
Click to expand...

The float valve (inlet valve), especially if it’s catching on the wall of the cistern or the syphon. If you’re unsure post a photo of inside of cistern when full of water.
B

Undertrained said:
The float valve (inlet valve), especially if it’s catching on the wall of the cistern or the syphon. If you’re unsure post a photo of inside of cistern when full of water.
Click to expand...

The float valve doesn't catch on the wall but it's a pretty close fit alright.
I've slightly overfilled the cistern (used a bucket of water) then flushed & its not much better. 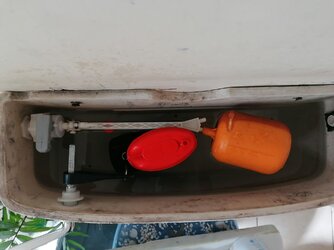 Reply to weak toilet flush in the Bathrooms, Showers and Wetrooms area at PlumbersForums.net

Why does my toilet spray water outside the bowl as it flushes?