I'm a qualified plumbing and heating engineer with nearly 20 years experience under my belt.

I have an issue with a (client supplied) TM Traymate shower tray/trap and wondered if anyone else has had similar issues? As you can see from the pictures, it has cracked directly inline with one of the two fixing screws which retain the entire trap. The shower tray has been installed for around 6 months and has been leak free up until the clients child stubbed her toe on the decorative cover which covers the waste. 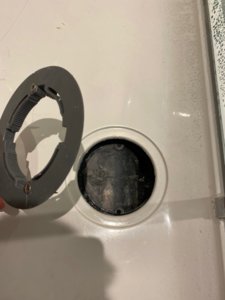 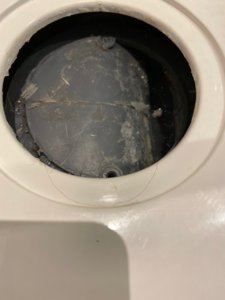 Traymate instantly put the issue down to 'installation fault, over tightening of the two screws' and have washed their hands of it. Their manufactures instructions do not specify how tight the two screws need to be and simply state 'do not over tighten' and when I questioned this to their technical team they could not give me an answer either. In addition to that, the tech team also said that in the event of over tightening the grey retaining ring splits, however as you can see from the pictures it is still flat and intact.

In my professional opinion, relying on two 25mm wood screws to hold a trap onto a 3mm resin rim in just two places is destined for only one thing.

Strangely, despite their claims of having a lifetime guarantee they have dismissed any issue with being an installation fault without a site visit or even looking at the pictures and given the rather abrupt and automated response from their tech person I feel as though they get this issue more than they are letting on.

Id be interested to know if anyone else has had similar issues or would like to comment on if they also see the trap design being up to scratch.

I’ve cracked one on install wasn’t even tight just cracked on the same place as yours put it down to not much meat on the plastic / bubble in manufacturing phoned Mira up sent a new one out under warranty
Warning If Your Asking Advice About Repairing A Fuel Burning Appliance, Dont Be Alarmed / Put Off If We Ask For Your Registration
OP
J

I’ve cracked one on install wasn’t even tight just cracked on the same place as yours put it down to not much meat on the plastic / bubble in manufacturing phoned Mira up sent a new one out under warranty
Click to expand...

Thanks for the reply - the trap is fine (I think the first picture I uploaded isn't particularly clear) its the tray that's cracked. Mira have always been pretty decent, Ive fitted about 20 Mira Flights and never had an issue.
R

Plumber
Surely the client standing on the waste outlet would exert a force onto the edge of the tray and be as likely to crack it as an over-tight screw? My feeling is an overtightened screw would/should strip out the thread, not crack the tray.

Not speaking from specific experience with this design, but my feeling is you genuinely haven't done anything wrong. Traditional wastes clamp the tray/bath, sink between the two halves of the waste and do not exert an uneven force that is likely to result in this kind of failure, but it seems the tray itself is weak and unfit for purpose if it breaks this easily.
You must log in or register to reply here.