Gas Engineer
Been doing ok so I treated myself to a rothy pipe freeze machine. Up to 28mm - very impressed with the tests I've done in the yard at work.
Does anyone use these, we always work on a per job rather than per hour basis and im amazed when I think of all the times I could have done with one and all the time I could have saved.
Is it possible to split a pipe esp if you freeze too close to a closed valve e.g.one you couldn't isolate easily which failed in closed position.

Esteemed
Plumber
Gas Engineer
Advent Win
I have had one for years, if you fast freeze the two heads must touch each other , dont leave any gaps or it will split .

you can double head one pipe but would space them apart around 4-600mm your safe then as if one goes you have a back up
Warning If Your Asking Advice About Repairing A Fuel Burning Appliance, Dont Be Alarmed / Put Off If We Ask For Your Registration

Esteemed
Plumber
I have the same one. Part of my job involves performing maintenance and alterations in three college campuses with mostly 40 year old plumbing. The pipe freezer is invaluable to me in replacing or cutting in service valves so I can perform repairs and maintenance. The systems are falling apart in places and I could not do my job without the freezer because my work is 95% performed during college opening hours and I can't just go turning off certain sections of the building.

Awesome piece of kit from my perspective. When I was doing general domestic plumbing the company had the same model too. It made so many potentially awkward jobs easy.
OP
W

Gas Engineer
I think it's gonna be one of those things that makes me wonder what I've been doing all these years.
Got it lined up for a tricky Stopcock change next week where the only alternative is to get the water board to isolate 60 flats coz the communal systems in a right state and the building owner's useless.
Or just
freeze and go...

Post automatically merged: Mar 12, 2020
you can double head one pipe but would space them apart around 4-600mm your safe then as if one goes you have a back up
[/QUOTE]

How often does "one go" and do you know why?

WC1 said:
I think it's gonna be one of those things that makes me wonder what I've been doing all these years.
Got it lined up for a tricky Stopcock change next week where the only alternative is to get the water board to isolate 60 flats coz the communal systems in a right state and the building owner's useless.
Or just
freeze and go...

Post automatically merged: Mar 12, 2020
you can double head one pipe but would space them apart around 4-600mm your safe then as if one goes you have a back up
Click to expand...

quite often esp if you have secondary circuit pumps pumping eg thawing out the line or the plug could crack / disslodge and come shooting out had one or two of them
Warning If Your Asking Advice About Repairing A Fuel Burning Appliance, Dont Be Alarmed / Put Off If We Ask For Your Registration
M

I've used this machine many times. It's brilliant and pretty reliable, once I put the two together and left a gap between, say 30-50mm on a 15mm copper, the pipe froze and left a big bulge between the prongs lol. Since then I always touch together or leave a nice gap of at least 200. Although if space is limited just use one it's good enough.

I've also had the pipe unfreeze on me twice which was unpleasant and very messy, once on a hw flow 28mm before I could tighten the valve! Luckily I could switch the water off but within those 2 mins caused a lot of damage... I tried to freeze In order not to inconvenience others but would say in hindsight, if possible just turn off and don't chance it..

Also top tip, when freezing to further avoid risking the ice block bursting out crimp pipe slightly with some grips.

Post automatically merged: Mar 12, 2020
Also will not normally freeze unless water has stopped circulating. So sometimes is tricky trying to freeze a pipe in order to fix a leak if you can't stop the leak temporarily. Been there for hours trying to freeze a dripping pipe, just won't happen unless maybe very small leak on small pipe.
OP
W

Gas Engineer
I'll keep an eye out for that
O

Esteemed
Plumber
Don't forget to price the 'new toy' into the price of the job.
You might do things a lot quicker than someone without the freeze kit, so you should never forget how long it would take you to do the works without the kit and price accordingly

Froze a pipe today with the throw away kit from rothenberger. Burst the 15mm copper pipe! Never seen or done that before!! 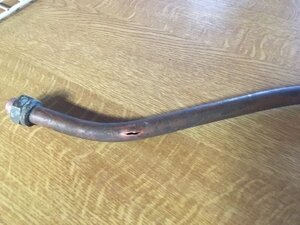 No idea. How do you know if you get 2 plugs? Where it blew was the bottom of the freeze. The nut was on a tee and the rest of the pipe went up to a tap.

All I can think is it must have frozen in two places leaving a water pocket between to do that. The offset bend in the pipe might (must?) have something to do with it.

One thing is known for sure, there is no common container that can withstand the expansion pressure of frozen water. It is a crazy powerful force. Normally there's enough give in the system you are freezing to allow the expansion but there must have been a pocket of liquid water between two expanding plugs of ice, the water being incompressible acted like a piston and had nowhere else to go but through the pipe wall.

I just think it’s old pipe and the fact it’s on a bend (not by a pipe bender) the pipe wall was weak and the ice was just enough to blow a hole in the side.
OP
W

Gas Engineer
It's got to have something to push against to blow the pipe.

What do you mean? I don’t understand.
OP
W

Gas Engineer
As I understand it, water expands when it freezes and water is essentially not compressible. When a plug of ice forms in a pipe the lengths of pipe either side of the ice plug are expanded slightly to take up the pressure increase. If there is not enough length of pipe then there isn't enough "stretch" to accommodate the expansion and the pipe bursts.
If 2 ice plugs form near each other then as they grow toward each other there's not enough length of pipe to accommodate the expansion and the pipe bursts. Or if an ice plug forms near a closed valve or stop end again the pipe bursts as the plug grows toward the obstruction.
I only realised fairly recently that for frost to blow a pipe I think the water has to freeze at 2 points near each other or at a single point near a valve.
That's my take on it anyway...

Ah I see. Highly doubt it was the case here as the burst in the picture is near where the jacket ended. It would be impossible for me to have two ice plugs forming either side of the burst.
OP
W

Esteemed
Plumber
The ice plug compressed the water up against whatever was on that nut on the pipe, had nowhere else to go and burst through the thinnest part of the pipe wall. Thinner either from bending or just manufacturing variances. Even in a beautifully made piece of pipe, one place will be the thinnest and have to fail first when over-stressed.

That but was on a tee so please explain where the water will / would expand too! Single pipe (frozen) to a tee (2 options)

I can only think that despite being frozen in a single jacket the pipe froze in two places separated by liquid water and the ice plug was not one continuous piece.

It's an unusual one that's for sure mate.

Very. And I do doubt the “double ice plug” as where it burst was right at the bottom of the jacket. Not a place where is expect it to freeze. We’ll never know.
You must log in or register to reply here.