Finally I have figured out what the two stop cocks in the kitchen do as they both had to be replaced due to leaks.

The one under the sink stops the cold water from coming into the kitchen tap and the one which is in the wall panel is connected to the incoming mains water and needs to be fully turned on as before it was turned most of the way clockwise (previous people who lived in flat saw a leak and rather than fix/replace the stopcock it was turned a majority of the way clockwise which stopped the leak) the plumber told me it should never be turned in the opposite direction of the flow of water which it previously was which may explain itchiness and skin rashes all over my body every time I used the kitchen cold water for drinking or cooking and as of getting the issues fixed last month the rashes are clearing up.

My first question is: Does anyone know what happens when mains fed water goes in the reverse direction instead of the right direction where the arrow is on the check valve? Does that mean that the water is contaminated or mixing with the neighbours as I worry that it poisoned my body?

I live on the top floor flat and have two neighbours below me in a block of 6 and we share the incoming mains fed water pipe from the street which comes into our building, would I need anything such as a NRV or check valve to prevent any chance of backflow or contamination, as I want everything to be above board and not worry about water mixing with my neighbours or reverse flow.

I have a mixer taps throughout the flat and isolation valves fitted on each pipework.
Gas Combi boiler

Thank you so much for reading and I would appreciate any advice or help.
B

Could you look at the pictures and see if everything looks legit and it may help with the query I posted above thank you.
Pictures 1, 2, is under the kitchen sink with cold water pipe with the stopcock then above it is then the hot water pipe.
Picture 3 under kitchen sink is the cold water pipe connected to the washing machine.

Where’s the check valve ?
B

Hi, that is what I would like to know is there a check valve anywhere in the pictures and if I do require one then where would it be placed as mains fed water pipe is shared with my neighbours?

All flexi hose pipes have isolation valves and the hot water pipe under the kitchen sink I believe has a check valve (pipe above cold pipe under sink) where as no where else in the kitchen is there one. Also on the mains water pipe picture with the foam insulation what does the Tee which is connected to the copper pipe do?

Thank you and any advice would be much appreciated.


You don't have permission to view attachments. Attachments are hidden.

Hi, the flat was built circa 1965 and is an ex council flat. All the other flats are council owned and had their kitchens/bathrooms etc upgraded but mine was not upgraded because the previous owners bought it before the upgrades were available.

A plumber came and had a look at the pipework in the bathroom and kitchen, was pleased with the isolations valves fitted on all pipes and most of it looked fine but recommended to fit a double check valve on the cold water pipe under my sink, any thoughts on this thank you. 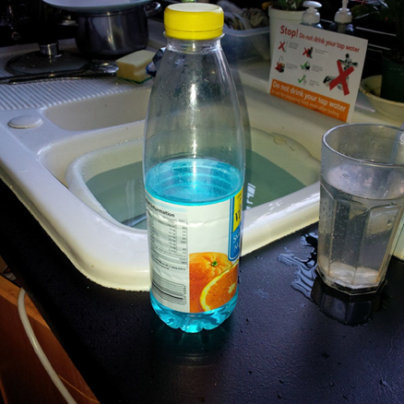 Blue water case study A Severn Trent Water customer phoned in complaining that his drinking water was bright blue. The consumer – who was at the time undergoing chemotherapy – had

Thank you for the information and the link was an interesting read.
I noticed that when my neighbour runs her kitchen cold tap and I run mine at the same time, the pressure/flow of the water decreases but it doesn't happen with the hot water tap just the cold in the kitchen.
That's why I thought maybe a double check valve should be fitted in case the neighbours water is interfering with mine.
B

Hi everyone, a plumber is going to fit a double check valve just off the tee pipe in the picture does that seem about right, where would be the best location to fit it? Either on the 15mm pipe coming out the tee or the mains water 22mm pipe?
Thanks so much.

B
2nd stopcock in kitchen query
Thank you for the replies. The stopcock under the sink can turn the cold water on and off in the kitchen. The 2nd stopcock in the wall when...

May 19, 2022
BobbyJoe
B
B
Stopcock no2 in kitchen turn off or keep on?
Sometimes you worry me. That isn't how you apply tape to a gland nut. It's called gland repacking and was shown in old DIY books before the...

May 25, 2022
Ric2013
R
B
Water supply and drain cover query
It's the Water Co who should clear out the stop valve chamber and fix the valve if required. And also identify where their stop valve is and if...