I’ve recently moved into a bungalow with an open vented central heating system installed in 1987 with 8mm microbore running to the 10 radiators. One of the radiators needs replacing as it’s got a small corrosion pinhole in the body and we wanted to fit a larger towel rail anyway. Having gone under the floors to check the layout and found a couple of kinked sections of the 8mm pipe (which explains poor flow at those radiators) I’ve decided to rip out the 8mm and replace it all with plastic 10mm.

While I was under the floor I also found the drain point and gate valve and another radiator point (with TRV and lockshield valve) where a radiator has been removed.

There’s also another gate valve between the primary flow and return loops which I think is for balancing the system left/right flow but I’d like to confirm.

A rough plan of the layout is attached, radiators and HWC removed for clarity. The airing cupboard pipework at the bottom is an elevation view, the underfloor CH loop at the top is a plan view. The flow/return from the boiler via the loft are 28mm, reducing to 22mm after the bypass gate valve and then it’s all 22mm underfloor with manifolds and tees reducing to 8mm for the rads and 15mm for the drain.

The floor standing LPG boiler is in a small WC at the back door with a cupboard built around both it and the pipework. The flow and return go straight up into the loft, I’ve not drawn it out but the return is just a clear run from boiler to airing cupboard, the flow has tees for the vent (pretty much as soon as it comes up from the boiler) and for the cold water feed from the F+E tank (about a metre before it drops down into the airing cupboard).

Questions:
1) the gate valve in the airing cupboard between 28mm flow and return is, I think, a manual bypass valve. It’s currently closed, can it be left like that?
2) is the gate valve underfloor between CH 22mm flow and return for balancing the system as I suspect?
3) it’s currently about 1/2 a turn open, I know it’ll need adjusting after the radiator pipework is replaced if it is a balancing valve, but if it’s not can it just be shut or removed completely?
4) there’s nowhere near the boiler that’s accessible are there any issues with putting a system filter in the 28mm return pipework in the airing cupboard?

Thanks in advance, if you need more information let me know. 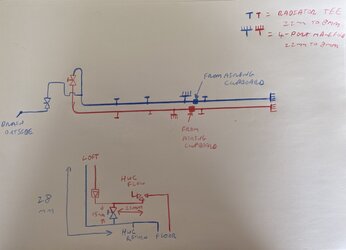 I wouldn't use 10mm plastic. I would use 15mm copper.
Switch to s plan for heating and hot water.
Bin the gate valves and fit an auto bypass.

Thanks for the reply.

Plastic instead of copper is a practical matter. The subfloor access is through a 2’x2’ access hatch in the outside corner of the only room that doesn’t have laminate, Lino, vinyl or real tiles fitted. Lenghts of copper pipe longer than about 1.5m simply won’t fit into that gap and I’m minimising joints as much as possible.

10mm rather than 15mm because it’s easier to work with in the crawl space and because manufacturers make outlet plates for it. It’s a timber-framed house so the idea is to bring the pipes out the wall behind the radiators with an outlet plate, like they do with new builds these days.

What are the benefits of S plan vs Y plan, other than needing more plumbing work and some electrical work to implement? Or is that just your preference?

The last statement implies you think the gate valve in the underfloor loop is also a bypass valve, is that what you meant or did you just mean replacing the one in the airing cupboard with an ABV?

I would agree with the above.
The system will need balancing but could be done better with auto bypass valves.
The bore of 10mm plastic is similar to 8mm copper so you won't gain anything in flow.
I would use 15mm copper.

What output is the radiator you are installing?

Edit: I was wrong, the replacement is 6900 BTU. Loss of heat output isn’t a problem, it’s in the open plan kitchen diner and the TRV is usually turned down anyway (we’ve been here since just before Christmas so have experienced the winter temperatures of the house) so worse case it’ll get turned up a bit.

I completely understand the preference for larger diameter copper. It’s just not practical to install without ripping up more flooring than I’m willing to. Flow is only a problem on the two radiators I’ve found that have kinks in the microbore. I’m surprised any water is flowing at all given how kinked they are.
B

If you have a crawl space under floors could you not drill a 25mm hole from outside under the floor level - post a load of 15mm copper through the hole and patch the small hole when finished?

I’ve done this through brick myself.

Ben-gee said:
If you have a crawl space under floors could you not drill a 25mm hole from outside under the floor level - post a load of 15mm copper through the hole and patch the small hole when finished?

I’ve done this through brick myself.
Click to expand...

Probably, and I could probably repeat the geometry exercise of the four east/west sleeper walls and four north/south sleeper walls in the other half of the house, but it’s extra work and extra expense for no reason that I can see.

Can we move on from the copper vs plastic debate? Or at least give a reason for using one over the other that isn’t just an opinion or personal preference?

What purpose does the gate valve in the 22mm flow/return loop under the floor serve if any?
K

I only use 10mm plastic where necessary like chases down walls etc and keep as short as practicable.
If plastic is the way to go then use 15 or 22mm and tee off in 10mm if necessary.
Copper is likely preferred as it is easier to support, flows better and gets better value as the number of fittings increases.
I wouldn't pipe UP to wallplate and back DOWN to rad as I don't think it's good practice, even if using plastic in void I'd run 15mm copper tails to rads from the floor.
I don't see any point in the gate valve, maybe a bypass or to use when draining. If it was once a 'one pipe' system then it would have been a balancing valve?
Last edited: Jun 10, 2021

Thank you for the helpful info.

15mm plastic to the rads with a short length of copper from the floor is a possibility.

The flow/return loop runs down the centre of the houselongest single direction run to a radiator is just over 4m, the rest are all <3m. I suspect that’s partly why it was done in 8mm microbore in the first place.

The small leg/loop with the gate valve runs close to where the fireplace is so I guess there may have been a back boiler there before the CH system was installed. Whether that would have been a one pipe system or not I don’t know.

dodger421 said:
Probably, and I could probably repeat the geometry exercise of the four east/west sleeper walls and four north/south sleeper walls in the other half of the house, but it’s extra work and extra expense for no reason that I can see.

Can we move on from the copper vs plastic debate? Or at least give a reason for using one over the other that isn’t just an opinion or personal preference?

What purpose does the gate valve in the 22mm flow/return loop under the floor serve if any?
Click to expand...

I think @Ben-gee was only offering you a good suggestion. These are methods people don't often think of and are generally the result of years of thought and experience working in a trade. Suggestions like this are worth a lot and can save time and unnecessary work and expense.

Re Copper V Plastic
You were replacing 8mm copper with 10mm plastic. They both have a very similar bore to each other and due to the type of fittings and frictional resistances, they will perform similar over a relatively short distance.
I personally think the i.d. is too small for the radiator you are installing which is why I suggested 15mm copper. If you want to use 15mm plastic, that will work as the bore is approx 11.5mm so the flow rates you require for the radiator in question are catered for. I don't like the stuff but that is just an opinion and is not relevant to the performance of the radiator.

The gate valve you mention would have been installed as a by-pass valve going off the drawing. It will have been put in to aid balancing but may not necessarily be used or required dependent on your system and its design/component parts. Each system should be taken on its own merits. If it is in use, I would replace it with an auto by-pass valve.
Last edited: Jun 10, 2021

I appreciate that and @ben-gee’s comment is certainly helpful and innovative. I took it as such and I’m sorry for the short tone of the reply it wasn’t intended to be as dismissive as it sounded. Call it frustration that the topic seemed to be getting fixated on choice of pipe rather than answering the question I had.

Thank you for explaining, I was working off the fact that the system is running fine on 8mm copper so didn’t particularly need larger diameter pipe. I see that 15mm would be preferable, and it’s certainly what I’m used to seeing in other places I’ve lived.
New posts