Hoping someone can help with what I thought was a minor problem/easy fix issue with the towel rail in my new-ish house; it is now permanently cold.

I'll explain a bit of background, the system set up and some things I've tried so far... Hopefully I'm missing something blindly obvious but it has had me stumped for weeks and weeks now.

The UFH system is a Robbens Systems UFH setup with a three zone manifold fed by a Glowworm Flexicom CX30 combi-boiler. This is the only heating the house other than electric radiators. System setup below: 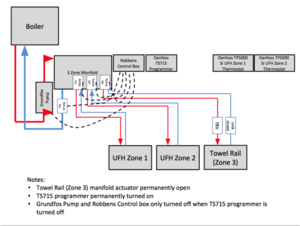 So, I removed the original towel rail to replace it with a slightly wider one when redoing the bathroom a few months ago. The original radiator was always warm/hot, so I had no worries about the current system setup/pipework. Thought it was a simple remove old rad, plumb in new rad, fill/bleed, sorted... The new radiator filled up and bled fine and was adequately warm for a good few weeks. It then just went cold. Thought this was pretty strange but knew there were plenty of things to try so I did the following:
At this point I started to look at the UFH manifold/setup which feeds the towel rail and two UFH loops. After speaking to a plumber and him suggesting some things I tried the following:
During some of the above the towel rail randomly heated up to a lowish temperature then promptly went back to not working.
A family friend fiddled with the lockshield (loosened it right off) the other day too and the radiator warmed up for about a day but then promptly went cold again...

So I'm pretty stumped... The strangest thing is that it was all working fine for a while and then suddenly nothing.

Any questions/thoughts are more than welcome as I'm struggling to get any plumbers to come and have a look at this!

Thanks in advance,
Chris

Are you sure towel rail actuator is opening fully and connecting with end switch to bring boiler on?

Dan said:
Did any air come from it when you bled it?
Click to expand...

Bled which part? Manifold had some air in after flushing and radiator had some air after emptying and re-filling - both as expected. No more air in either. Towel rail still cold.


SJB060685 said:
Are you sure towel rail actuator is opening fully and connecting with end switch to bring boiler on?
Click to expand...

Definitely forgot to add the picture!

You can potentially ignore my first comment, I was picturing zone valve for towel rail loop before I saw your manifold.
OP
P

Gasmk1 said:
then you need to check if it is wired in to bring on boiler it may just be wired in as a heat sink
Click to expand...

Hmm I don't think that is the case. The towel rail was hot all of the time before it stopped working and I havent touched any wiring. I did check it though (finding any info from Robbens seemed very difficult) and it seemed to stack up/make sense. Edit: however I'm no expert so I'm not 100% sure!?

Maybe I should just get a plumber in but that is proving difficult due to let downs/being ignored.

Sorry for the confusion earlier PlumbBob, I misread the initial Intel. I have little experience with your type of system, which is why I've held off from commenting further but no one else has piped up so I will speak. After reading your details and looking at the images again I'd be suspect of the towel rail actuator head. Water much like electricity likes the path of least resistance, if you partially close a lock shield or valve or completely close one you are generating a resistance and the water wont circulate (I suspect you will have a little heat in towel rail flow out of manifold but not further). You've proved the rad is full as have you that it's free of air and the valves on towel rail are open, so having said that, like above I'd be suspicious of the manifold valve. You said you took the head off and checked spindle but have you checked to see if you're getting 230 volts to it? This could be a fault in the wiring centre, a loose connection etc. You said this actuator is constantly open so like GasMk1 said above this circuit is most like a heat sink, meaning its constantly open but not wired in such a way to bring boiler on. If you're competent with a multimetre check to see if you have a feed. Also if you take the head off, bring the boiler on and manually hold spindle in open position you might find it starts to circulate. Again UF heating and manifolds aren't my speciality but it's worth a try and of course I might be wrong.
OP
P

Sorry for the delay in replying and thanks for the suggestions SJB.

I've somehow figured out a lot of stuff since seeing your post and trying things!!!

So by switching on and off the thermostats and buzzing them out I could prove that each actuator was working and doing what they should. Realising that the TS715 programmer controlled the hot water was good too as now, I've programmed everything correctly which the pump is not running all day everyday.

Not sure but by finding out/doing all the above, the towel rail started to heat up. Whether I free'd up a sticky valve on the Robbens manifold or setting the towel rail programmer to not be on 100% of the time has made a difference, I'm not sure...
A curious thing I did find was that the "return" pipe from the towel rail was always hotter than the "flow" pipe. This made me think that the TRV valve was on the wrong side, however after just swapping the valves over, I'm not so sure as when I re-filled the system, opening the original "flow" side (now a lockshield) it filled the radiator up under pressure. This makes me think this is actually the flow side afterall.

I still have some questions I hope someone can help with though:

After all this rambling, you may be wondering why I swapped the valves round when the towel rail seemed to be working but I really want to understand the setup, not just have the radiator working haha.

Your actuators are on the return of the manifold, the pipe/pipes that don't have actuators are the flow. Yes single direction valves must be installed correctly.

Edit. Terminal screwdrivers are dangerous and a multimetre is the tool to use, it will prove you have both live and neutral, using a terminal only proves voltage on phase wire. Also you may have live and neutral to an actuator but that doesn't mean motors etc are ok.
Last edited: Dec 6, 2019
OP
P

SJB060685 said:
Your actuators are on the return of the manifold, the pipe/pipes that don't have actuators are the flow. Yes single direction valves must be installed correctly.

Edit. Terminal screwdrivers are dangerous and a multimetre is the tool to use, it will prove you have both live and neutral, using a terminal only proves voltage on phase wire. Also you may have live and neutral to an actuator but that doesn't mean motors etc are ok.
Click to expand...

Yep, had worked that out already re: the actuators. I wondered if on the flow side of the manifold whether installing flow meters would be useful as these are used to help balance the whole system.

I realise terminal screwdrivers are not the ideal tool to use but as I said, no multimeter currently. I also visually confirmed that all actuators open and close when called to by the control board, which they do. I forgot to write this above.

As the orientation of single direction valves does matter, I'll make sure these are correct now, especially as I've confirmed which is the flow side of the towel when re-filling.

Any other answers to the above would be good though, might even help someone else out in the future!

Any further help on the questions I posted above from anyone?

Cheers!
You must log in or register to reply here.