I had my boiler pump replaced yesterday as the other one had stopped working. The guy said he had one on the van that would fit and the boiler started working again. Now I'm finding the radiators that are furthest away from the boiler arent getting quite as hot as they were before. The pump he put on has 3 speed which are 35 45 50 and he set it to 3 and the one he took off was 40 65 95 and was set to position 2. Its a grundfos pump & it's a fairly large house. Is this just coincidence or do you think I should call him back?

Also roughly how many radiators do you have ?
G

did he change the boiler temperature?
G

Your old pump was probably a selectric, has the "new" one got LEDs on it or is it a used old type pump?, if it is then there will be a fairly large reduction in the circulation flow, the impeller may also be partially blocked with deposits.
G

no it was a new pump that he fitted and both the old & new are the same red selectric red ones, only difference seems to be the flow rate, I was just interested in if the lesser flow ratings would make the new pump less powerful than the old
J

Can't find any reference to a 35/45/50 watt 5m selectric which would be as rare as a hen's tooth now anyway as they have been superseded a number of times, of course there might be one or two lying around somewhere, unused.
I have referenced a 5M 35/45/50W model but this actually was/is more powerful than your old model, its B energy rated with speeds of 1700/2100/2300 RPM vs yours at 800/1200/1900 RPM so even speed 1 @ 1700RPM is/should be more powerful than speed 2 @ 1200RPM on the old model, so speed 2 or 3 should be "overkill" on the new one. The pump curves bear this out as well. So that pump should be OK except something silly like installed wrong way round or pump isolation valves partially closed. If you still have the old pump note the speeds on this as well.

Can you post a photo of the new pump or jot down the label data, especially the 3 speed settings etc.
All the older, selectric and possibly later Grundfos pumps have a date stamp on them, PC: year&manufacturing week, ie PC:9704 will be a pump manufactured in week4 of year 1997.
G 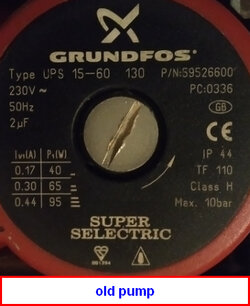 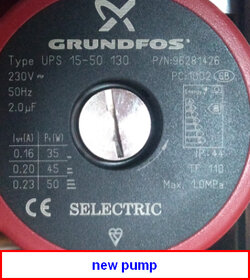 Sorry for the late reply, 1st chance I've had to get online today, pics as requested
J

You can see that the replacement pump is almost 12 years old (week2 2010), the old pump was 18 years old (week36 2003).
As you have no idea what condition that replacement pump is in and it's not performing then I wouldn't waste any more time on it and get your plumber to install a new pump, would suggest a DAB Evosta 3 (owned by Grundfos) and a far better choice than the Grundfos UPS 3 as it gives better settings and also displays the Pumps Head, Flow and Power.
V

He charged £120 all in. He did take the pump he fitted out of a sealed box & it seemed to be new ( I had a look at it while he was taking the old one out)
G

so was I right & the new pump was less powerful than the old one?
V

I had the same situation in my home. I originally had a 15-60 which I personally replaced with a new 15-50 some years ago thinking that I would not need a 15-60 as my main flow and return pipes are 22m and clean and I only have 10 radiators total. Also, remember that these pumps are using less power now than before. Whilst it's almost the same, I did notice that the radiators were not as hot. Anyway, I am still living with the 15-50 - I have got used to slightly less hot temperature.

I would take take John.g guidance above.
G

thank you all for your help, I'll call the plumber back and get him to sort the job out properly
J

The selectrics had weird pump curve settings. Have a look at the pump curves.

So, IMO, its just not performing, probably because the impeller is blocked up but only worth looking at it if you are handy yourself, just shut the pump isolating valves, remove the 4 bolts and remove the head, replace. Also clean the pump ports. Take a photo first of impeller.
If your plumber is known to you then he should just replace it with a new DAB Evosta 3 for the cost of the pump.

Feb 12, 2021
magicjez
M
A
Why is my new circulation pump twice as loud as previous model?