Advice on how to remove broken waste body

Discuss Advice on how to remove broken waste body in the Bathrooms, Showers and Wetrooms area at PlumbersForums.net

My shower had previously been repaired really badly before I moved in. The plastic retaining collar on the waste had broken off. Instead of repairing it properly and replacing the waste with a new one, someone used bathroom sealant to hold the trap in place and just plonked the broken collar on top of the sealant. Now of course, it's come out as the sealant has degraded and it just fell apart.

The fix is relatively simple if I can get the old waste thread body removed from the trap.

The tricky part is that the trap is quite loose and moves around easily, as there's nothing holding it in place. I probably need to cut some notches into the plastic rim of the threaded waste body and use those to exert torsion and fit a L shaped implement into the trap to hold it in place while I try to unscrew the waste body.

However, I don't do this for a living, so one of you experts on the forum may have a craftier way of dealing with this problem.

Any suggestions solicited. I really don't want to have to remove the entire shower enclosure so that I can access the trap from underneath.*** 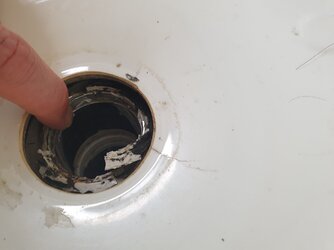 Can’t you undo the chrome threaded bit by hand ?
R

Ok, managed to do it. I cut notches into the top of the broken waste body, cut a flat piece of metal of 50mm in length, slotted it into the holes and unscrewed the body.***
R

No - nothing to grip on unfortunately. See my last post - devised a method that worked

Reply to Advice on how to remove broken waste body in the Bathrooms, Showers and Wetrooms area at PlumbersForums.net

R
Fitting a new shower waste - gasket under flange or not?

M
Replacing pop up plug and waste in bath. No screw to remove drain cover from plug hole.